Some art is constructed out of pure rage. 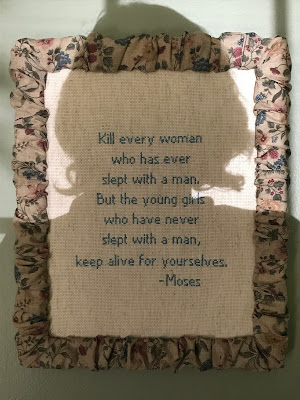 Did you know girls are jailed in Afghanistan for failing "virginity tests"? That tests for so-called "virginity" are used all over the world to determine whether a woman qualifies for employment, or education, or even marriage? Even here, a woman's sexual activity can diminish her worth in the eyes of her community, or even the laws that are supposed to protect her.

I'm not surprised, of course. If there was one message that came to me from all directions with surprising agreement, it was that the best gift I could possibly offer my future husband was an untouched vagina. Tampons were viewed with suspicion not merely as a health hazard, but because they posed the risk of "prematurely" stretching a hymen, which could mean no bleeding on one's wedding night. Horrors!

Deuteronomy 22, which I had read more than a dozen times before my own wedding night, assumed that a bride's parents would hang onto the bloodied honeymoon sheets (euphemistically called "the tokens of the damsel's virginity") to produce as evidence should her husband later try to worm out of the marriage by accusing her of having had premarital intercourse.

And in this Old Testament gem, Moses himself orders the Israelite army to use virginity tests as an act of war. It's rather horrifying in any translation, including the Jewish Publication Society's Tanakh (1917):

Even Jesus, in the story supposed to illustrate his compassion and respect for the woman he met at the well, quickly brings up her sexual history ("you have had five husbands, and the man you have now is not your husband"), establishing her unworthy position in the patriarchal hierarchy with a single sentence.


It was a revelation to me to realize (not that many years ago) that a woman's value is not, in fact, tied to her sexual experience, OR to her lack thereof. That my sexual history is my own, not a gift I present to a partner. And a woman's sexual experiences, consensual or otherwise, ought certainly never influence society's interest in her safety or well-being. 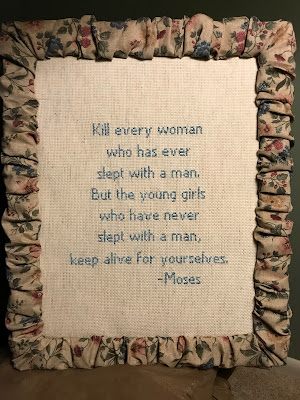 I spent a significant part of the summer trying not to be swallowed up by a black cloud of depression.

It wasn't terribly obvious. I was still doing all the things a mom does: grilling, shopping, laundry, planning activities, taking the kids to the movies, baking pies, teaching my oldest to drive, swimming, walking, ice skating, making birthday cakes--plus painting, and writing. All while trying not to drown in a pool of my own tears.

This piece was going to be monochromatic, but then I couldn't keep the colors out of it. Which is why I called the result High-Functioning.


My youngest had asked for a tree on her wall, and I couldn't think of a cheerier project to keep me moving in spite of my what-is-even-the-point-of-anything funk. 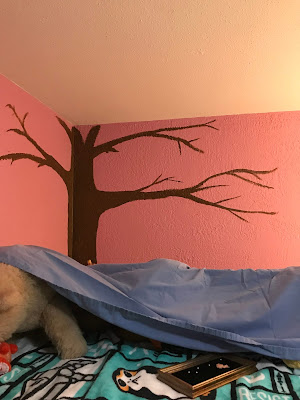 Painting together made for some great mother-daughter bonding. Especially when she insisted on a squirrel, and we had to figure out together how to achieve it. 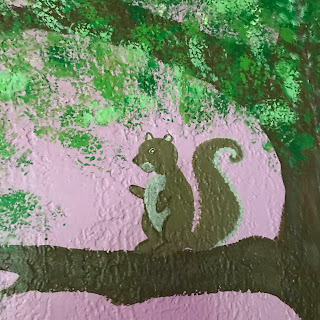 The clouds have thinned considerably since then, and our tree is a pleasant reminder that happy things can still grow in dark times. 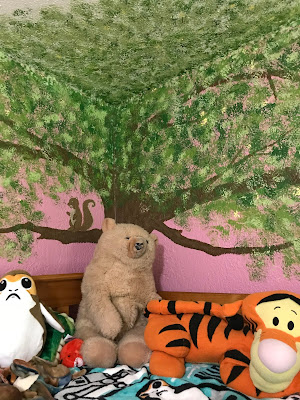 As satisfying as it is to watch my novel take shape, I can only spend so long in that toxic world-inside-my-head before I need fresh air. When the words get to be too much, I'll take a day (or a week) off from writing. Sometimes I spend all day in the kitchen, sometimes I visit the botanical gardens or see a movie, sometimes I meet a friend for lunch, and sometimes I take my paints out to the porch and play with the colors until the blank canvas turns into something new.

I picked leaves from my backyard for this one, painted them with gold paint, and pressed them onto the canvas. I hadn't expected to stay with the blue palette that day, but it fit my mood, while also improving it. 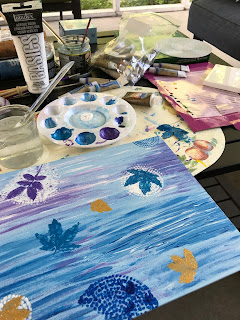 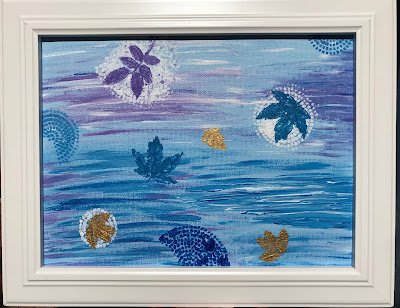 I'm finding that art is one of the very best ways to rid myself of "demons" from the past. I painted the flowers for my mother, in front of the curtains that hung in her room when she would beat us with a wooden spoon. 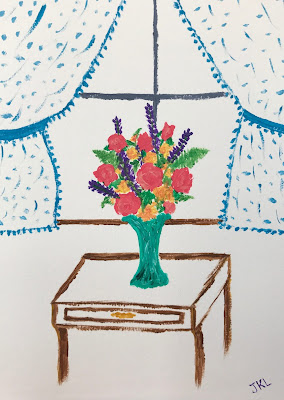 Last Thanksgiving I again found myself trying to hack up the expectations of a multi-generational Normal Rockwell holiday dinner with the women in aprons serving platters on a spotless white tablecloth. We had just watched the second season of Stranger Things, so the turkey became my toothed monster. 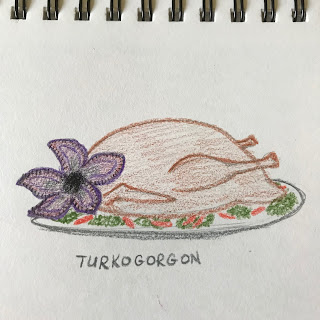 I remember when my friend had to give up her rainbow stickers because rainbows had supposedly been co-opted as a "New Age" symbol. Decades ago, my mom and I cross-stitched more than our share of Bible verse mottoes. They hung in the kitchen, the living room, over the toilet... This line from Genesis doesn't get enough play, in my opinion, and encapsulates why I'm glad not to be in a relationship with the god of the Bible anymore. 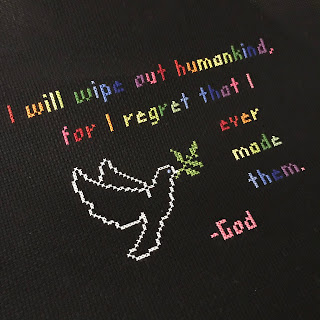 Let's face it, this year has been tough.

I hate the violence in our world.

And when kids aren't safe here, I feel shattered.

Hung Out to Dry

The tiny clothespins caught my eye at a craft store.
They were real, with working springs.
I bought them on a whim and an image began to take shape.

I sketched it quickly with pastels on cardboard from the recycling bin.

Later I got out the sewing machine.
The skirt and jumper are cut from outgrown jeans.
There is eyelet lace on the Mom-size bloomers.

And several months after I hung it on the wall, this very familiar scene from my younger life became the opening scene for my novel. 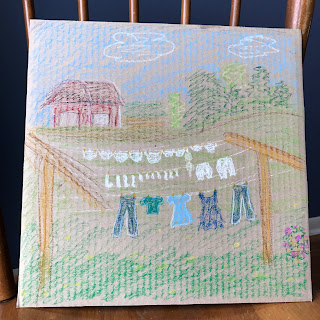 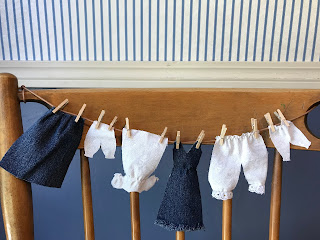 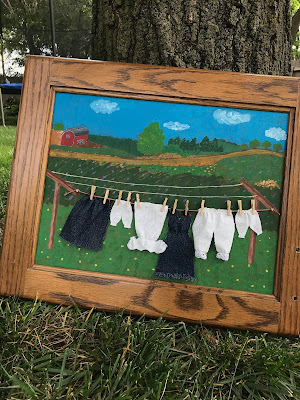 Sometimes I begin with an idea.
Other times I just know I need to take time for art,
so I spread out a blank page or canvas,
pick up a brush or a crayon,
and wait to see what will happen next. 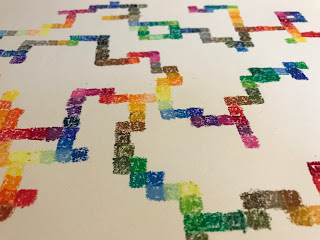 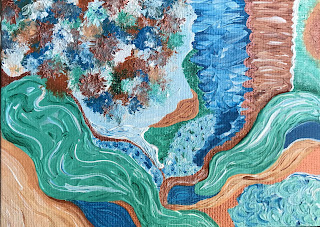 Playing with paint textures and brush strokes
Posted by Jeri at 8:24 PM No comments:

A strange thing about art: sometimes I make things I can't explain and don't understand. 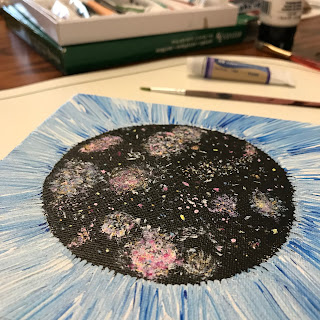 I was in a play about women who made important
discoveries in astronomy at Harvard,
and this happened. 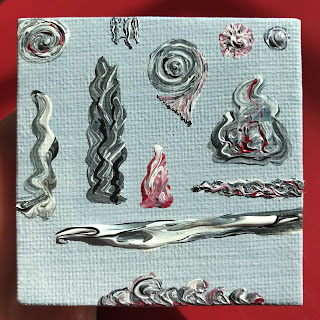 This one is tiny.
I meant to paint in all gray tones that morning,
but some red found its way in anyway. 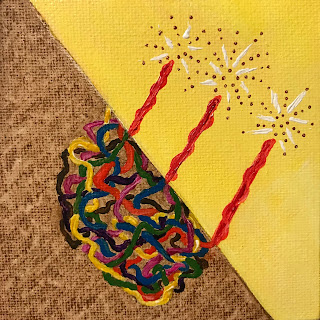 I have multiple title ideas for this one,
but maybe it's better left to the viewer. 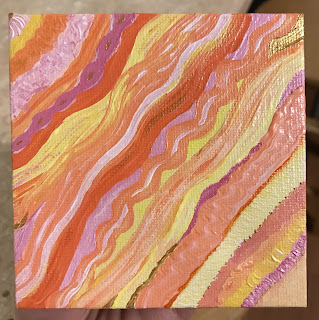 This one is definitely about womanhood. 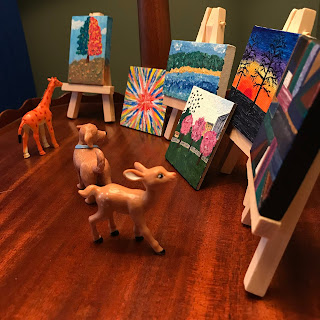 My kids' animals go to the art fair
--on our end table! 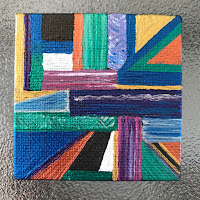 This was inspired by an artist whose work
I admire at an annual Wichita art fair.
(Metallic acrylic paints on canvas.) 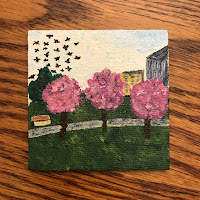 It's nowhere in particular, though the gray
building was inspired by the Wichita skyline.
And those could be cherry blossoms. 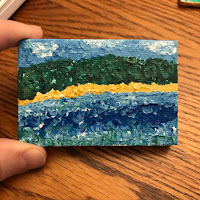 A Michigan peninsula, of course. 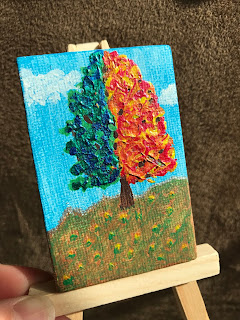 An untitled favorite.
I was thinking about relationships,
seasons, friends and lovers--
and this happened.

On a happier note, here are a few paintings on miniature (2") canvases. I am all for art projects that don't require much clean-up! These are small enough that I can set everything up on a little table on the shaded back porch. 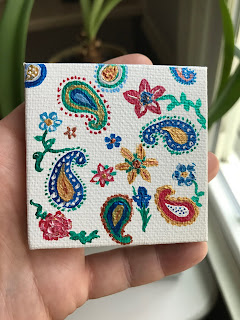 This favorite is a magnet on my fridge.
I've always loved paisley patterns
and metallic acrylic paints are too much fun. 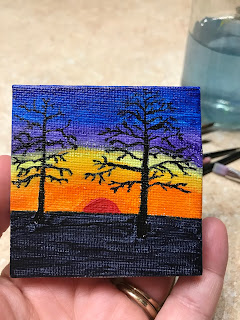 This one was inspired by a winter sunset
silhouetting the sycamores in our neighborhood. 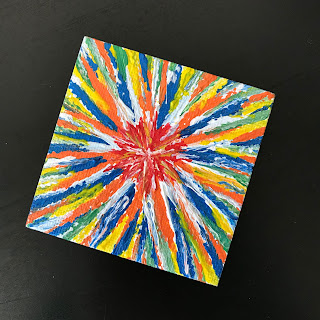 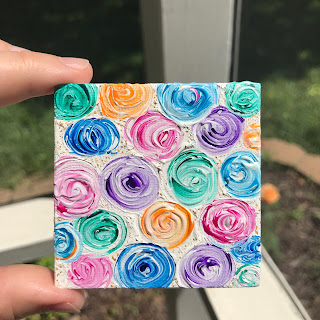 Of course, ripples and swirls are a recurring motif.
This happy one reminds me of cupcakes.

I realized last month that I haven't shared much of my artwork here. So I'm going to start a series of art posts with a heavy mixed-media piece I titled Broken.

For the last year, Broken has hung on the wall in our living room near the fireplace. Creating it was an act of healing for me, as years of trauma worked themselves out of my body and into the paint and clay.

Some find it disturbing to look at art about religiously motivated child abuse, but I've found something reassuring in seeing pain externalized and safely pinned to the wall. I'm finally ready to find it a new home, though.

Like all art, it is personal, and I'm afraid 3-D lace, charcoal, and metallic stickers don't translate well into pixels on a screen. But here's a close-up anyway: