At the beginning of the new year, I began exploring the mixed feelings I have about my name. I spent January puzzling over it, playing with ideas, experimenting, feeling slightly disoriented each time a cashier asked me to sign a receipt.

Judging from my friends list, the yearning for a fresh identity is not uncommon among my homeschooled peers. We know after all, that we are not the "arrows", the culture warriors, the virtuous men and women we were expected to be. Some resent the meaning of their given names, some crave anonymity or have safety concerns, some want to sever ties to an abuser's name. Some change their names to escape expectations tied to gender roles. Some simply want to define themselves.

I adopted Jeri as a nickname a few years ago because I wasn't ready to put my real name all over the internet. I liked that it was short, secular, and gender-bending in the vein of Little Women's Jo March. It was easy for strangers to pronounce and it fit easily on a name tag.

I first tried the new handle at Starbucks (because what did it matter what I told them to write on my cup?) and then when I met new people locally, because they weren't acquainted with my family of origin ("Yes, all our names come from the Bible; no, they don't all start with J.") and, as I transitioned away from Christianity, I was weary of the questions my given name always raised ("It's from the Hebrew, think Jerusalem. No, we're not Jewish. Or Amish. Or Catholic."). Eventually, for convenience, I switched my name on Facebook and even toyed with the idea of of changing my name legally.

Jeri feels very much like "me" these days. She's liberated and brave, sexy, self-determining, compassionate, engaged in the community. She dances and practices yoga. Jeri has friends. Jeri has adventures. She is a left-wing version of what my teenage self hoped to be!

But Jerusha is a lovely name. The name of a Palestinian queen (well, a king's mother, anyway--not quite the same as a queen!), according to Jewish mythology. It's unusual, and almost nobody can pronounce or spell it right away. When I hear it these days, I'm usually in a doctor's waiting room and the nurse has to guess whether I'm Hispanic, black, or Caucasian.

Lately I've missed Jerusha a little, even though electronic devices like to put a red wavy line underneath her as I type, as if she's wrong somehow. She's getting eclipsed by Jeri and I've realized I don't want to lose her.

Jerusha is more introverted and she feels more deeply. She is the bookworm who imagined becoming an artist. SHE experienced my childhood, is connected to my siblings, and fell in love with "Chris" (another name-identity story in itself!). Jerusha had to fight her way out of the cult, break up with an abusive god, and learn how to be a gentle mother while accepting not having one herself. Jerusha is strong, resilient, and cautious.

I now have people in my life who know me by one name or the other. But the most important people are acquainted with all sides of me. I don't want to be the "before" and "after". I want to be both. There have been a few moments over the last year when I felt Jerusha was merging with Jeri and those moments felt very powerful and healing. I want more of those! So I've been pondering how to further integrate the two versions of me.

In recent months, I've reconnected with more people who know me as Jerusha but are accepting of the way "Jeri" has evolved. Hearing them use my given name has caught me off-guard a few times, but it's also felt reassuring--friends building me a bridge to help connect my identity with my history.

My parents didn't give me a middle name, so Jerusha is what I have to work with, and I'm not going to part with it. I put it away for a while while I worked through a lot of emotional baggage, but now I'm ready to dust it off again and see how it feels. 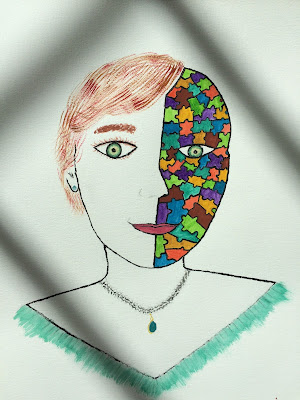