I grew up in an abusive home.
Love and warmth and fun were there, too, but it was a very conservative, "born-again Bible-believing" Christian home where violence against even very young children was part of our parents' religious practice.

We were beaten frequently with wooden rods, both as punishment and to remove foolishness from our hearts. Beatings (we called them "spankings" then, but they were very painful, sometimes extended, and usually left bruises) were sometimes concluded with hugs, assurances of how much we were loved, or with a prayer to the God who required my parents to hit us for our own good. For years after we were deemed too old to spank, we watched or listened as our younger siblings received the same "discipline" we could still feel in our own bodies. And we were traumatized.

It took me years, even decades, to admit that my siblings and I were abused. And in that time, despite good intentions and preventive safeguards, I ignorantly perpetuated some of the same abuse toward my own kids. Recognizing the difference between training and abuse was a slow process, aided by plenty of reading (the Love & Logic series, numerous memoirs, Charles Dickens, child development, the effects and treatment of trauma), movies (Jane Eyre, Nicholas Nickleby, Lost in Yonkers), and talking to therapists.

It was painful to accept that some of what I had believed to be responsible parenting was actually abuse. Painful because I didn't want to be an abusive parent, and painful because I didn't want to believe that I had had abusive parents. But even if my parents had the best intentions, they did abuse us, nevertheless, using violence, intimidation, shame, and isolation to control our behavior. 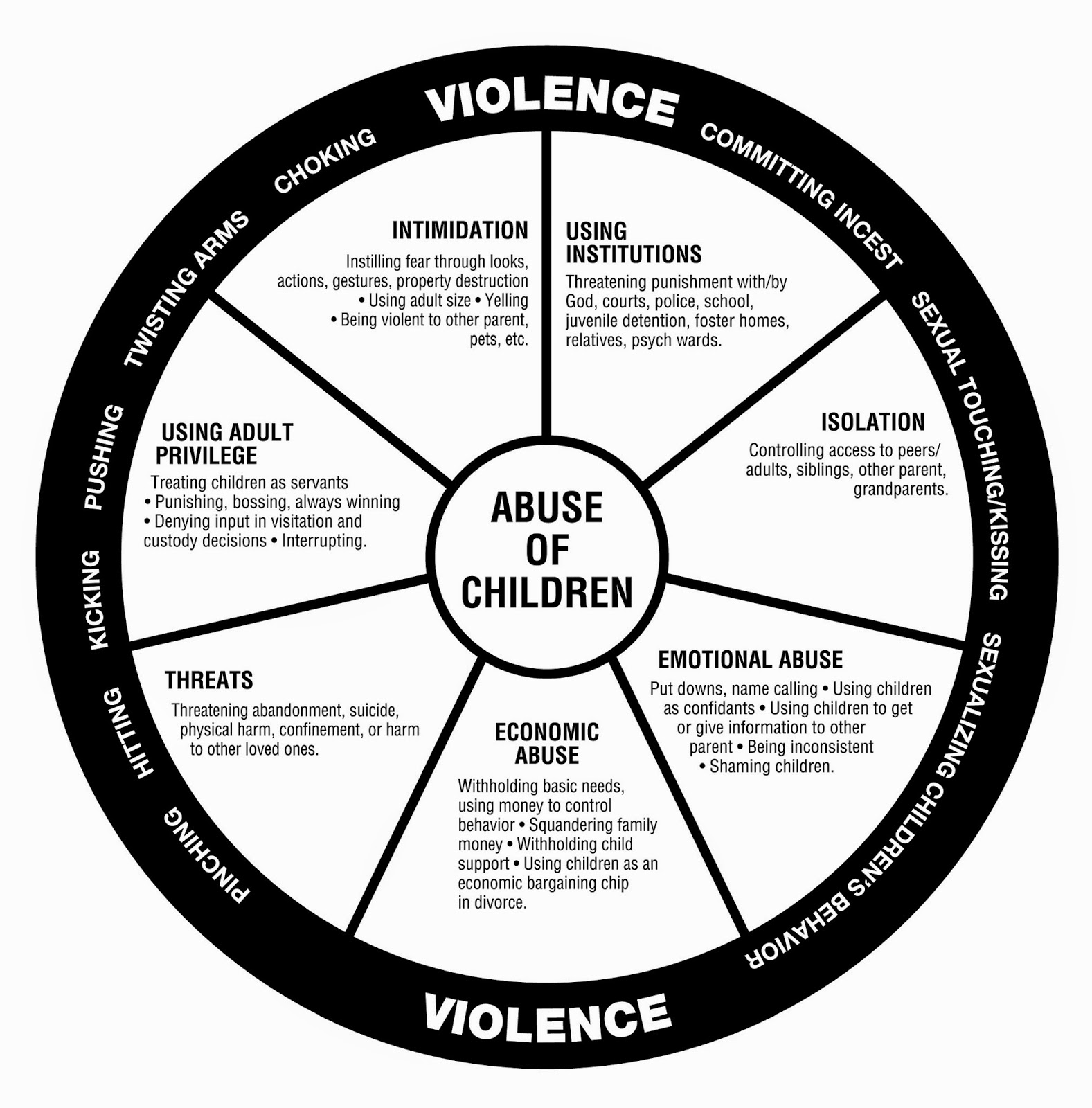 (For a full-page version of the above graphic, and other helpful tools, visit The Duluth Model website.)


Therapist and educator Robbyn Peters Bennett is the founder of StopSpanking.org.
In her TEDxTalk titled "Violence--a family tradition", Bennett describes the Adverse Childhood Experiences Study, which linked toxic stress in childhood (including the fear of being hit) with social, emotional, and physical problems--and even reduced life expectancy--in adulthood.


The science is in, and spanking is out. If I had realized that spanking can damage the brain's ability to self-regulate, I would not have paddled my children when they were young. Unfortunately, many American states still allow educators to hit children in public schools, a situation Charles Dickens was deploring way back in 19th-century England.

Years have gone by since I discarded the spanking sticks, but my children still tell me that I am a nicer, kinder, calmer, and happier mom than I used to be.

As I unlearn childhood lessons and practice treating myself with kindness, patience, and respect, I have become gentler with my family, too. We all benefit from a home that is nurturing and safe, a space where each individual's right to his/her body is respected.


Last year, while helping with a local volunteer project alongside my daughter, an older man made a joke about spanking. I winced, but my daughter paid no attention. When the man looked confused by her lack of response, I found my voice.

"She doesn't know what you're talking about," I said, with a trace of pride. "We raised her right," I added, to make sure he felt my disapprobation.

I fervently hope the tradition of violence against children in this country will cease with my daughter's generation. It has gone on long enough.