The People You Meet

"You will be the same person in five years as you are today
except for the people you meet and the books you read."
-Charlie "Tremendous" Jones

I've forgotten most of the motivational speakers who came through Gothard's training centers, and Charlie Jones was no more memorable than the rest, but occasionally a gem sparkles through the rest of the bullshit. The line above is one that stuck with me and still rings true.

For most of my life, my best friends were... books. As socially isolated as I was, authors--living or dead--were my greatest outside influence. I didn't so much read books as assimilate them. Reading was my lifeline as I sought to build a sustainable life outside the IBLP cult, and later, outside Christendom.

This year, however, books took a back seat. I checked out library books and returned them unread. I attended book club discussions on stories I hadn't even opened. I bought a book, had it signed by the author, and it lies, still-new, buried under a stack of paintings on my desk. Because this year I started living my own story.

This year was about people.

This year was about connection.

It was about building new friendships and proving old ones. Finally meeting Facebook friends I felt I knew already. Visiting in people's homes, getting to know their kids and their pets, eating and drinking and dancing together, sharing music and art. Teaching and learning from each other. Retelling our stories. Standing together against injustice and abuse. Laughing, crying, hugging, feeling anxious... being vulnerable and even getting hurt.

One interaction at a time, my friends have influenced the way I cook, the way I dress, the way I shop and spend money, the music I listen to, the shows I watch, where and with whom I spend my time, the way my family eats, how we handle conflict, how we have fun.

Friends have made difficult things bearable and pleasant ones intoxicating. They've kept me grounded. They've nudged me to try new things. Each time the threads of our lives cross, whatever the circumstances, they create something that wasn't there before.

Some connections were deep and others shallow; some encounters were short-lived, while others have lasted longer. Some friends have left their mark on our whole family. Some people who said they were friends changed their minds later, though I continue to enjoy the gifts they shared. Others showed that they're in for the long haul!

People and relationships were not highly valued in my cult upbringing. I saw few models of lasting friendships between adults who weren't related. Friendships with peers were dismissed as unimportant, even harmful. I was taught to be selective, to sort people into categories and associate only with the "best"--those who shared similar viewpoints and experiences. Relationships were discarded when they became uncomfortable or when values clashed. I hope I am finally growing past that. I appreciate all the kindness and open-mindedness others have shown me this year, and I want to spread it around as best I can. 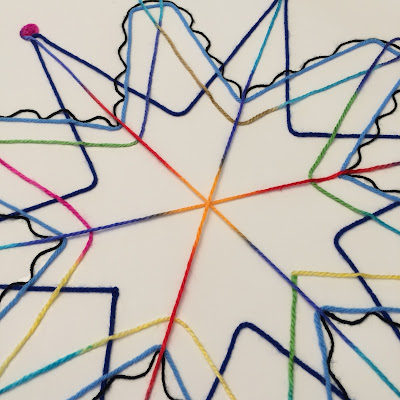