I wrote this post months ago, but am only just posting now: 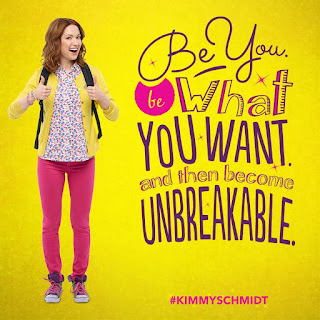 A new comedy series released on Netflix in March resonated strongly with me and dozens of my homeschooled friends. Some of the reactions I saw posted on Facebook were: "fantastic", "awesome", "amazing", "so much to love", "WOW", "so good", "SO REAL", "best show ever", and "painfully funny".

Whether or not we were raised in actual cults (we certainly don't get branded as anything as exotic as "mole women"), we identified with so much of Kimmy's story as written by Tina Fey and brought to life by Ellie Kemper.


...my weird [Christian fundamentalist] upbringing got me used to the idea that I would never be like everyone else. It also told me that there was a lot that life could offer me that I never expected. You think the future's never coming, and then it does. The world's going to end, and then it doesn’t — well, then. Life can begin.

Flor Edwards was reminded of her own experience growing up in a cult:


I resolved at some point that, as Kimmy so aptly puts it, "The worse thing that can happen has already happened." I was going to have to find my way, like Kimmy, to cope with this world that I was unprepared for.... Like Kimmy, I learned to cope by learning to understand people.


A few critics have complained that Unbreakable Kimmy Schmidt is just too darn cheerful for a story about a woman with an abusive past. Other films have explored the darker side of being part of or exiting a cult. The BBC miniseries Signs and Wonders, Shyamalan's The Village, the harrowing drama Martha Marcy May Marlene, the indie production Paradise Recovered, and the documentary I Escaped a Cult all come to mind. Each of these has played a part in my recovery and are excellent in their way.

But, speaking as a cult survivor, we know the traumatic parts already. We are acutely aware of how hard it is for the real-life Kimmys to make their way in an unfamiliar world.

What we needed were the laughs. And Kimmy Schmidt, with her mile-wide smile and eye-popping wardrobe choices was just what the doctor ordered.


After watching several back-to-back episodes, though, Chris and I did have to turn off the TV and take a break. Some of the situations were a little too real, hitting places in our psyches that were still painfully tender. While those scenes failed to trigger a full post-traumatic reaction, they did highlight some wounds from our cult experience that weren't healed yet.


Still, I mostly found the series, with its emphasis on Kimmy's resilience to be empowering. I could relate to so much, though the story was presented as an extreme situation. No one thinks of me as a "mole woman"--my parents appear normal to outsiders and we certainly never lived underground--but as I watched I still felt like Tina Fey was telling my story, in a way, and that was extremely validating!

I found the humor a little uneven, but there was so much I *did* enjoy. And comedy has always been used to open people's minds, so I think it's a good sign when some jokes (the racism portrayed in the show, for example) make us uncomfortable. Because that unease makes us think about *why* it feels off and pushes us to confront uncomfortable truths about our society or even our selves.

I look forward to seeing what happens to Kimmy and her friends in the next season.

"Life beats you up, Titus. It doesn’t matter if you got took in by a cult or you’ve been rejected over and over again at auditions. You can either curl up in a ball and die… or you can stand up and say, 'We’re different. We’re the strong ones, and you can’t break us.' "