One day perhaps I'll pick up Our Courtship Story again, but for now, I have to jump to to the end and write an epilogue.


When I worked for IBLP in Oklahoma, my roommate and I once perused bridal magazines and selected our favorite dresses. I was conservative, of course: the gown I chose was appropriate for a much older woman, rich with textures of silk and lace. 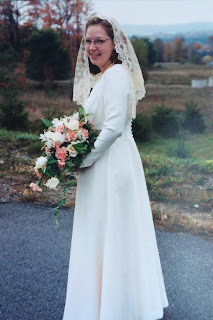 Sometime after Chris delivered an engagement ring to the southern Philippines, I began browsing for dress patterns over SIL's tenuous Internet connection. Believing I'd have to sew much of it myself, I looked for simplicity and lines that would easily skim the figure I considered "curvy". (These days, a few pounds heavier and many scruples lighter, I dress myself two sizes smaller.)

The ivory raw silk came from a textile bazaar in Manila. I adored its natural texture, not satiny like lingerie I'd never owned, but nubby and matte. I'd warned my parents that I would not be wearing snow white, but I don't recall that they expressed any alarm. I was still as sexually ignorant as they could have hoped, but years with IBLP had given me an aversion to white.

The zipper and darling oval buttons we bought at a fabric store in Wichita, where Chris's mom did most of the sewing for me three weeks before the wedding. Fearful that my mom would find fault with the dress (the bust too tight? the neckline too scooped? the hips too hugged?) I left it in Kansas, revealing it to Mama just days before the ceremony, with my outspoken aunt present to deter any negative remarks.

I did feel slightly princess-like in the dress, in a medieval sort of way, but it was far from the image I'd always carried of what a wedding gown should be. Its lack of sparkle, detail, and embellishment was a great disappointment to one of my baby sisters, who reassured herself and me with, "Well, I guess you're just having a cheap wedding..." It was true. The simple nylon slip underneath--necessary to hide the full-coverage bra and granny panties--cost more than the dress itself.

Bless my maid-of-honor, she tried. She took me to Victoria's Secret herself and bought me a black lace bra, which she declared every married woman ought to have. But like David walking around in Saul's armor, I was not used to such accoutrements. So for my wedding day, I stuck to the familiar.

By the time I exchanged the bridal gown for a honeymoon travel dress a few hours later, I'd acquired a new ring, a new name, a new status. Not to mention my first kiss.

The cleaned silk hung in the back of our closet for years, coming out on rare occasions: A church Valentine's banquet. Our wedding anniversary between pregnancies. When I was finished breastfeeding, to see if it still zipped! And then, last year, when I again withdrew the dress from its vinyl sheath.

My sentiment for the gown had diminished, representing as it did too much of the life we'd repudiated. We'd taken the wedding photos off the living room wall years earlier and hidden them in the spare room closet. I'd found it healing to recount the unwritten portion of our courtship saga to another lover. I was mourning my first romantic break-up. And I had an idea for a costume for my first Halloween party, and it involved repurposing my wedding gown.

On that September day, I slid the silk off the hanger and eyed it anxiously, scissors in hand. Isn't a bride's dress sacred, in some way? Yet here I was, ready to do some permanent damage.


Pulling out my wedding gown again was more triggering than either of us expected. So many emotions and flashbacks! Then I remembered that the guarded girl who donned that dress one October morning fourteen years ago has vanished. Out of that silken chrysalis has emerged a stronger vibrant woman carrying all the old memories but possessing new powers and a hell of a lot more wisdom.

I didn't end up using the dress for Halloween, but Chris did agree to help bring another artistic vision to life that day. He also finally told me that he'd never found this dress sexy. Ahem! Well, at least he was smart enough not to judge the cake by its austere frosting! 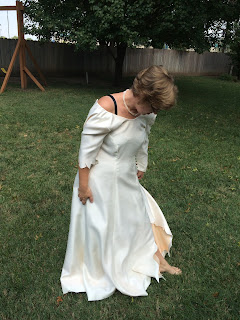 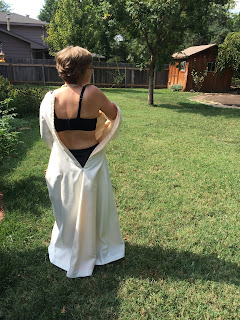 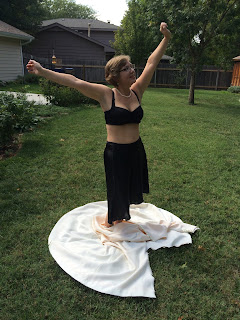 Those yards of silk were more symbolic in the backyard that day than they ever had been. I was as if I had at last shrugged off a skin that no longer fit, fought out of a cocoon to enjoy a winged new life.

In the year since, I've been aware of rapidly increasing distance between my past and my present, and most of the time, I'm completely comfortable with that.

I have finally created the life I want, and how many people can say that?