Chapter 1: The Composition of Anxiety

On a chilly autumn day in 1989, a little country girl turned fourteen. She blew out the candles on her apple-spice cake and eagerly took her birthday money to Kmart to buy a flannel-lined denim jacket with pleated sleeve caps. She had been eyeing the latest portable cassette player/radios behind the counter at the drug store, but her mother was not keen on a teenager listening to who-knows-what under her headphones.

The girl's uncle knew what she really wanted, however, and he mailed her a birthday surprise: a Sony Walkman.

The girl was so excited!

The next day she wore the new jacket to a sleepover at her best friend's house, accompanied by the new Walkman, of course. The two girls talked about prayer and boys and periods and their mothers and listened to [religious] music together till six in the morning.

Despite being a small town, Traverse City boasted its own Moody-affiliated Christian radio station, WLJN. Since we had gotten rid of our television, we took great pleasure in listening to the children's shows on Saturday mornings and dramatized history or adventure stories at night. We grew familiar with all the actors' voices from MBI in Chicago and it was a great treat to attend a live Children's Bible Hour rally in Grand Rapids, or when their tour reached our part of the state. During the day, Mom liked to listen to "Unshackled" and "Focus on the Family", and I would listen along with her. The tale of faith, forgiveness, diligence, and kindness overcoming abuse, injustice, and bad luck always thrilled me.

When the weather was right, we could sometimes tune the car radio to Christian station from farther away. One spring they were broadcasting a dramatization of the Easter story throughout Passion Week (still winter in northern Michigan). Dad would help us bundle up in our coats and then we all sat together in his car in the driveway while he carefully adjusted the tuner so we could hear every episode.

As I grew out of the single digits, I began to appreciate music as well as stories and gradually grew to appreciate adult vocalists over Sunday school marches. I would crank up Carey Landry's Catholic folk or an acapella Mennonite quartet covering Amy Grant on a beat-up boombox while I roller skated for hours in our basement workshop. My chore list lengthened as I hit my teen; I would tune in to WLJN while working at solitary, time-consuming tasks like ironing or sewing. The Moody Broadcasting Network played a mix of boring old choral pieces and current new solo artists on Saturday afternoons. The "Friday Night Sing" was a live concert from Chicago's historic Moody Church. The featured musicians were the popular "easy listening" Christian singers my parents' friends listened to: Steve Green, Steve & Annie Chapman, Annie Herring, Christine Wyrtzen, Larnelle Harris, Michael Card. Sometimes I would listen to my parents' record collection: mostly the evangelical Swedish sweetheart Evie.

By then my girlfriends (all from strict religious homes) had introduced me to Amy Grant, Michael W. Smith, and Petra. I knew those performers were too "hard" for my parents' taste so it seemed prudent not to mention them at home. And then--my very own Walkman, so I could listen to whatever I chose, "clandestinely", my uncle wrote in the card. Since I was the firstborn, I should have expected this step toward independence would make my mother anxious.

I was listening to WLJN on the Saturday after Mom took my Walkman when this song came on. Mom objected to the sound and made me shut it off. I was quiet, but vented my exasperation in my journal later. On Monday, I heard from my penpal--our parents had been Bible study friends when we were babies. Rach wrote about the musicians she enjoyed, including Amy Grant. Mom was very concerned. She announced that in order to get my Walkman back, I would have to go through a "music evaluation course" she and Dad had purchased from IBLP. 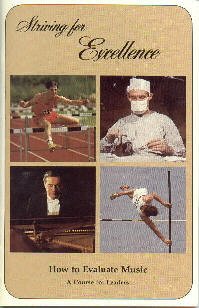 "Striving for Excellence: How to Evaluate Music", consisted of two audio cassettes and a booklet. No author's name appears on the booklet but the audio material is presented by Inge & Ron Cannon. (ATI families are encouraged to use this course as an education resource, along with Frank Garlock's book Music in the Balance, formerly available from Bob Jones University Press.) So, after tucking the the younger kids into bed, my parents and I settled into the sofa in front of the cassette player. Inge Pohl Cannon, enunciated her lines of the script with clipped precision while her husband read alternating sections in his soft, lazy Southern drawl.

The Cannons began with some music theory that was way over our heads. I looked at my parents and raised my eyebrows. They shrugged back and we returned to following along in the booklet. Then there were some odd bits and pieces about rhythms causing riots or neural damage in mice and a Wichita newspaper article from 1977 that quoted a kinesiologist denouncing the rock beat as the "most serious form of pollution we have". We didn't really know what kinesiology was, but with a name like Dr. Diamond it must be legit, right? (Diamond's website was unavailable at the time of this writing.)

Another doctor translated DNA into musical scores. (Don't ask me how.) He described how cancer genes sounded different from enzymes and antibodies and compared the scores to the music of his favorite classical composers. That was followed by a titillating paragraph by Frank Zappa (whom I'd never heard of). He said the Beatles didn't just want to hold your hand and compared Jimi Hendrix' musical sounds to "orgasmic grunts, tortured squeals, lascivious moans..." I had no idea whom or what he was talking about, but I felt very grown up just reading all those fascinating phrases!

Now we came to the heart of the argument: rock music, the very beat itself, was equated with rebellion and unbridled sensuality. It would make listeners want to take drugs and have sex. (Yes, I shared this handy fact with my daughter this morning and she looked at me like I'd lost my mind.)

And if we still weren't convinced, the Cannons explained that rock songs were imbalanced, like asymmetrical architecture. The best forms of art or music were those from the Age of Classicism: a definite beginning, a climax point, and a satisfying conclusion. With echoes of David Noebel's publications against rock music, this one deprecated Impressionism and Cubism while celebrating the Baroque and the Classical periods. "Rock isn't music, it's sound....Rock coarsens all it touches," they intoned gravely, oblivious to the fact that those words were penned by a humor columnist and entertainment critic with his tongue in his cheek.


We were then warned about an unseen danger that could have mysterious evil effects: "Undiscernible [sic] to the conscious mind, this technique, called backmasking, is able to influence a person through subliminal persuasion. The only way to determine the content of such messages is to play the recordings in reverse, a practice not recommended because of its ability to open a person's spirit to demonic oppression."

And the world of Christian music was no safe haven. Backbeat or not, there could be other hidden dangers lurking in the songs, what with the deceptively humanistic lyrics, treating the Lord with the familiarity of a friend, all while breathing seductively into the microphone. They played audio excerpts of popular "sacred" artists to illustrate these corruptions: I recognized Sandi Patti, and Michael Card. We enjoyed cassettes by each of them in our home: a Christmas album, and a collection of gentle lullabies. We had certainly never before linked their music to the [supposedly] blasphemous film The Last Temptation of Christ!

The course concluded with a prayer of commitment:


"Heavenly Father, I desire to excel for You and Your Kingdom, and thus, I yield to You my rights to music. I purpose now to cleanse my life and home of any music which violates Your principles and replace it with music which is consistent with the "new song" You want to develop in my life. I ask for Your blessing on my life as I obey You. In Jesus' Name, Amen."

The girl sat in the cozy living room and listened quietly to the "Striving for Excellence" audio presentation, keeping most of her thoughts to herself. When the cassette player clicked off, she took a pen and scrawled her teenage signature on the commitment line at the end of the booklet, under the prayer. Her cooperation was rewarded: she went to bed that night restored to parental favor and with her Walkman back in her possession.

And the brainwashing went on.