Libby Anne's post about Natural Family Planning this morning triggered some powerful flashbacks for me. Our experience with abstinence as birth control had life-changing effects, raising questions I had never before allowed myself to ask and permanently altering my worldview. A decade later, the memories knot my stomach and leave my body shaky.

We were young married newlyweds, parents of a tiny newborn. We had spent years immersed in Quiverfull theology and had been virgins all the way up to the honeymoon. Our daughter arrived before our first anniversary; we had zero knowledge of birth control. And after all those years of abstinence, we were far from bored with sex!

But... my fertility cycle resumed eight weeks postpartum. We wanted more children, but we certainly didn't want them a year apart. Still newlyweds, and now first-time home owners as well, we were overwhelmed by the sudden changes and challenges of parenthood  including a home birth, lactation difficulties, sleep deprivation, and friends with various opinions on vaccination! Financially, we were comfortable enough, but we were struggling to find a supportive social network and we had only barely begun to recognize the harmful psychological effects of the cult we had only recently separated from.

Trying to be responsible parents while not compromising our moral convictions, we considered our options. At our doctor's recommendation, we started using the Creighton model of Natural Family Planning, paying $25 a session to meet with a certified trainer and discuss our charts, with our baby in her infant carrier on the floor of the tiny office a few doors down the hall from our doctor's practice. We liked our coach. We visited her church once, borrowed books from her, read quotes from the Pope on the office walls, and even toyed briefly with becoming Catholic. 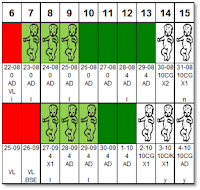 Practicing NFP involved a steep learning curve, but we are both smart and we had years of experience with following rules to the letter. We wanted each other desperately, but since I was breastfeeding, it seemed there were only about five days a month when the method gave us a "green light" to have intercourse. It was so complicated, we even got a sheet of yellow stickers to use besides the basic set of colors. And it soon became clear that sex would always be forbidden on days when my libido was high. NFP may have been "100% natural", but we were certainly fighting hard against God-designed nature!

When I found myself pregnant again before M was even seven months old, I was dumbfounded. I couldn't believe it. We were at a loss to know how this could have happened when the method was promoted by doctors and on city-wide billboards as 99% effective. After all those weeks of stress, tears, and painfully conscientious hugging, how could we be the 1%? We showed up for our next appointment, and told our [to us] shocking news. The method had failed us.

Our coach looked at me compassionately. "Merciful Mother-!" she murmured under her breath. Then she reviewed our chart, to figure out what had gone wrong, I thought. "Here," she tapped on a square. "This should have been a different colored sticker. You had intercourse on a day when you were actually fertile, and you achieved desired pregnancy. The method worked the way it was supposed to." Achieved desired pregnancy! Wha-?

So that's how they get their statistics. NFP works to avoid pregnancy (on infertile days), and to achieve pregnancy (when a couple makes love while fertile). The mystery is figuring out which ones are which ahead of time. When our coach submitted our records, we were considered a "success". We used informed abstinence to successfully achieve a pregnancy. I left her office feeling embarrassed, ignorant, and ashamed. I had to read the fertility signs, after all. Only I could tell if the cervical mucus felt "slippery", "lubricative", or just "smooth". Rather than an excited and responsible couple expecting their second child, we felt like scolded teenagers who'd just been grounded for accidentally breaking a rule. We just loved each other too much.

That was a hard year for me. The next two years are really kind of a blur. I had to wean the baby girl I adored. When she injured her elbow and was taken away crying for x-rays, I had to wait in the lobby with tears in my own eyes. I didn't have the energy to be the mom I wanted to be. I was anemic, slept a lot, and gained a lot of weight. I prayed to miscarry at first, then felt guilty when I had early contractions at 30 weeks. During that pregnancy I rethought my theology, read up on all kinds of birth control methods, and learned a lot about human biology. I wasn't ready to give birth again, but I did it. I only remember the following months because of the photos we took.

After the delivery, our NFP coach called us to set up appointments again. We hadn't come far enough to be honest yet. We said we weren't sure; we were considering other methods. "Condoms aren't effective," she warned, sounding anxious. We said we'd call her. We never did.
Fertility awareness is a wonderful and important part of being a woman, but it is no substitute for contraception when a sexually active couple is unprepared for pregnancy. And it is morally wrong for religious or health professionals to suggest that it is.