I didn't know about panic attacks yet. I only knew I hated the feelings that preceded walking out of the service when everyone else was listening politely.

It was worse when the soloist was a girl my own age. She sang "Lamb of God" one Sunday night. I spent most of the evening entertaining my baby brother in the lobby while feeling ready to burst into tears. Twila Paris had been one of my very favorite artists just a few months earlier, so the song stirred up all kinds of conflicted feelings.

Whether to proselytize her or to spare myself more discomfort, I listened to the Striving for Excellence tapes, then found the courage to loan them to Kim. We had been mere acquaintances; I don't think she ever spoke to me again. After a few weeks, when I left a phone message for her, she discreetly left the cassette album in the church's food pantry bin for me to collect. 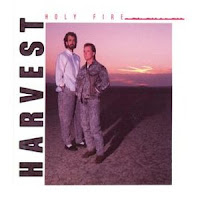 Wandering the halls in the church basement, my whole day could be ruined if I encountered a poster like the one on the right outside the youth room. I loved church, but described it as "the happiest and hardest, saddest and gladdest place I ever go". I even prepared some kind of speech to share with the youth pastor "how ungodly music almost destroyed my life". I was nothing if not intense.

Some cousins came to visit us from another state. While they were very musically talented, their church had an even narrower view of wholesome music than we did. They introduced us to Majesty Music, a music publishing and recording company with close ties to Bob Jones University--an organization we had mostly associated with homeschool textbooks.

I am indebted to my cousin for introducing me to music theory, patiently teaching me the names of the notes on a hand-drawn staff. But the night before they left, her parents must have helped my parents cull their tape collection. Over the next week, I noticed some of my favorite albums missing: Joni Eareckson's musical debut, for example; the lyrical folk-rock anthems of John Michael Talbot, the Catholic troubadour; and Dallas Holm's Easter cantata that moved me to tears the first time Dad played it for us. Really? Were the voices of these Christian brothers and sisters too dangerous to keep in the house? These deeply emotional expressions had always helped me to reconcile my Christian faith with my experience. I was confused, I missed the familiar sounds of my childhood, but I was determined to hold up the new standard anyway.

I wrote continually in my journal about music. It symbolized the gulf fixed between me and my peers at church--the only place I saw other teenagers. When the church started offering a contemporary early service, with a drum set on the stage, we finally left. (The elders weren't happy with us continually walking out anyway!) But church was hardly the only problem.

Eating out, a treat that became more rare as more babies arrived, was fraught with anxiety. We would choose a restaurant, drive there, then wait in the parking lot while Dad went inside alone to "check it out". He would ask to look at a menu, I think, but really he was listening for evil sounds. If it was acceptable (usually that meant silent), or if they were willing to turn their music off, he would come out and collect us. If not, well, we'd have to try another place. As the oldest, I felt tremendous internal pressure at such times. I wanted to anticipate the dining experience, but was afraid of having my expectations disappointed. So I would scan Dad's face when he exited the restaurant doors, searching for a clue to the result. Unfortunately for me, Dad's expressions can be hard to read. We never really knew the verdict until he announced it. By then my stomach would be in knots.

Shopping was another danger zone. I learned to mentally block out background music at Kmart or the mall. My husband is still incredulous when I don't recognize a song, "But it was so popular! It got played everywhere!" Maybe so, darling, but I was busy jamming the frequency in my head so I wouldn't get demons of rebellion or want to have sex. I didn't know the Beatles from the Beach Boys. Despite growing up in the 80's and 90's, I never listened to a Michael Jackson song till after he died.

Visiting other churches was really awkward. For a few years we settled at a tiny Independent Fundamentalist Baptist church that met just a few miles from our house. I took piano lessons from the girl who played the piano there. When her family left for a bigger, friendlier church, I inherited her spot on the piano bench.

As I got older, we became more entrenched in ATI teachings. I soaked up the student materials like a sponge, eagerly reading the newsletters from Gothard's "Headquarters" and imagining myself dressed in a navy skirt suit "giving the world a new approach to Life". At age 17, I was at last invited to join a missions trip to Russia to teach "character" in the Moscow schools. Some of my dad's clients helped sponsor my trip. Surrounded by other teenagers holding to the same standards, I was so thrilled to be having an adventure!


Read Chapter 4: The Lord's Song in a Strange Land