Continued from Chapter 1: The Composition of Anxiety.


The anxiety didn't cease when I got my Walkman back--oh, no. That was just the beginning.

Now that I was "on board", it was as if my parents and I became accountable to one another to hold up the new standard. I had heard them complaining about rock music in the church before, but ignorance had been bliss. I had puzzled over what they were talking about, but all I knew was that we sometimes sang songs like, "Blessed be the Rock, and let the God of my salvation be exalted." Now I knew exactly what they didn't approve of. My newest favorite songs about Christianity. Christian contemporary music. Steve Green, Sandi Patty, and maybe even Michael Card.

Mind you, the most secular songs I'd heard up to this point were "If I Had a Hammer" and "Frosty the Snowman". A band called Guns N' Roses just sounded dangerous; I could easily assume their songs were Satanic in some way. And for the life of me I couldn't figure out what a group like Stryper was doing in the religious book store. So I figured there really must be something morally corrupting about drums. 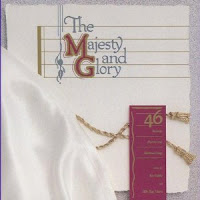 It took a while, but I developed a taste for the albums in my parents' collection that I had hitherto despised: choral hymn arrangements and orchestral soundtracks approved by the Gothard organization. I was proud of my new appreciation. It was most likely a maturing awareness of chords, but I chalked it up to God working in my heart and giving me a "hunger and thirst for righteousness".

There was a downside, however. One of my mom's homeschooling friends couldn't conceive of the late Keith Green's music being anything but holy--he was practically a missionary, for God's sake! She and my mom quarreled, the friendship cooled, and I didn't see her daughters anymore, which was sad because they were two of my dearest friends. Their house had been like my second home. They had introduced me to Twila Paris, and cut my bangs. I had tried to defend my mom's position against Keith Green, but her argument did seem weak and I missed my girlfriends, right or not. There were probably other factors I wasn't aware of, but it seemed like music was a divisive issue, even among the godly.

We were attending a Baptist church. Their service format typically included a vocal solo performance immediately preceding the sermon. Sometimes the soloist was accompanied on the piano, but more and more frequently he or she would opt to use a recorded accompaniment track. The Christian music accompaniment tracks followed a predictable pattern: a simple, melodious first verse with the faintest beat entering during the chorus; a richer second verse with the beat building for the chorus; then [usually a key change and] the stops came out with a strong beat, loud backup vocals, and stirring chord progressions leading either to a climactic cadence or a hypnotic fadeout with the music continuing after the singer had lowered the microphone and dropped her head.

The first part of the song was not a problem. But when the demonic backbeat showed up, we had to make a choice. We could "sympathetically vibrate" with it, opening our souls to mysterious evil influences (a typical example of Gothard's poor exegesis), or we could resist the devil by resisting his music. And so Sunday services became a spiritual minefield.

I'd check the bulletin first thing to find out who was singing. Some individuals were more likely to utilize the piano. If I couldn't tell, there was nothing to do but wait. We sang, greeted each other across the backs of the pews, bowed our heads for prayer, heard the scriptures read. At last the sanctuary would go silent, the soloist would step to the podium, and I'd hold my breath.

If she (it was almost invariably a she--would we have walked out on a man?) looked to the pianist, we were safe. If she looked to the back of the room to cue the guys in the sound booth, we were doomed. But I'd wait, hoping that this time it would be okay. First verse, no problem. As she went into the refrain for the second time, the drums would strengthen. My pulse would quicken, my muscles would tighten. With pounding heart, I would scoot to the front edge of the pew and watch Dad. When he glanced back at me, it was time.

We would stand up, all seven of us plus the baby who didn't walk yet. We would file quietly out of the pew and out through the doors in the back of the sanctuary to the lobby. There we would stand around waiting till the song was over when we would file back into our vacant pew as silently as a family that size can manage. Week after week. We started dreading church, sitting in the back row, arriving late to miss the music. And then stay late to socialize after the service. It was horrible.

Small wonder I didn't make any real friends at that church. We were the largest family, the homeschoolers, the only females who didn't even own a pair of jeans. We didn't attend Sunday School or youth group. We didn't approve of the Christian concerts the youth attended, sponsored by WLJN, which was sponsored by the church. The WLJN station manager was one of the deacons!

I tried to carry my head high. I was making a bold stand because of my superior commitment to Jesus and following the direction of my God-given authorities. But oh, it was agony. My heart would pound, my breaths would get short and shallow, I'd sweat through my church dress. And then it was over. Till next service, anyway.