Before they had gone to bed, all the men from every part of the city of Sodom—both young and old—surrounded the house. They called to Lot, “Where are the men who came to you tonight? Bring them out to us so that we can have sex with them.”

Lot went outside to meet them and shut the door behind him and said, “No, my friends. Don’t do this wicked thing. Look, I have two daughters who have never slept with a man. Let me bring them out to you, and you can do what you like with them. But don’t do anything to these men, for they have come under the protection of my roof.”

Lot and his two daughters left Zoar and settled in the mountains, for he was afraid to stay in Zoar. He and his two daughters lived in a cave. One day the older daughter said to the younger, “Our father is old, and there is no man around here to give us children—as is the custom all over the earth. Let’s get our father to drink wine and then sleep with him and preserve our family line through our father.”

That night they got their father to drink wine, and the older daughter went in and slept with him. He was not aware of it when she lay down or when she got up.

The next day the older daughter said to the younger, “Last night I slept with my father. Let’s get him to drink wine again tonight, and you go in and sleep with him so we can preserve our family line through our father.” So they got their father to drink wine that night also, and the younger daughter went in and slept with him. Again he was not aware of it when she lay down or when she got up.


The same Lot character shows up as a hero in the New Testament. One wonders what led the author to regard Lot as "righteous": 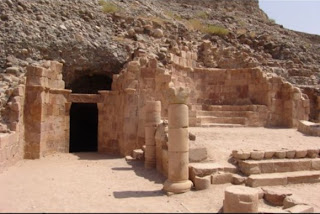 "When women understand that governments and religions are human inventions; that Bibles, prayer-books, catechisms, and encyclical letters are all emanations from the brains of man, they will no longer be oppressed by the injunctions that come to them with the divine authority of 'Thus sayeth the Lord.'"
― Elizabeth Cady Stanton