Today, Susan Campbell is a journalist and author in Connecticut. But she was once a young fundamentalist Sunday School teacher, door knocker, Gospel puppeteer, and Bible Bowl champion in rural Missouri.

Dating Jesus: A Story of Fundamentalism, Feminism, and the American Girl

I could relate to so much in this award-winning memoir, but it was Susan's brother, former child preacher, who spoke the book's most powerful line:

"Fundamentalism broke off in us, didn't it?"

Yes, it did. Like a sword, fundamentalism was plunged into our bodies, and then it got broken off in us so that we will never, ever heal from the wound. Like Perpetual Jesus on the Perpetual Cross, we are the walking wounded. By now, the shaft is part of our organs and these smiling, happy people? They have no idea.


Susan writes openly and passionately, but not bitterly, about the inequalities she experienced as a girl: in her home, at her school, and in her church. I strongly identified with her obedient frustration! Ultimately, those unfair experiences, the questions she was not supposed to ask, and the thoughts she was not supposed to think, drove her--like some of her American feminist heroes--outside the church in search of justice and "the social gospel".

Although an experienced public speaker, Susan poignantly describes the anxiety that threatened to overwhelm her the first time she was asked to speak from a pulpit, which is "so not a lectern". 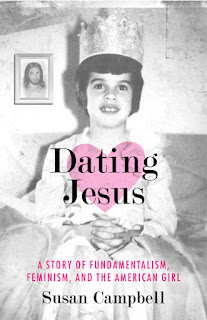 Still "Christ-haunted", she spends a significant portion of the book wrestling with Bible passages, seeking to reinterpret them in kinder, more inclusive ways. This is how Rachel Held Evans would sound if she exited organized religion. And because many of the pro-woman authors Susan cites (Wills, Armstrong, Ehrenreich, Rose, Stanton) are also now familiar to me, following her thoughts and reading her conclusions feels like participating in an intimate book club discussion.

Susan's church would not have acknowledged me as a proper fundamentalist. Regardless of what some of our churches may have taught, my dad never let us think we were the only ones headed for heaven. In my family, I suppose each of us devised, of necessity, our own theological framework to support the weighty framework of rules and disciplines and standards laid upon us while making allowances for believers who took a more comfortable path. Mine was a theology of superiority--a kind of lay monasticism for the ultra-committed lovers of Christ.

And fundamentalism broke off in me, too.