What Was That Cult Called?

After snacking on after-school cookies and milk, my teenage daughter casually asked, "What was the cult called?"

"'Cause I mentioned in history class that my parents were in a cult, and some people wanted to know which one, and I didn't know its name."

So I grabbed a marker from the board (I grew up with a chalkboard in the kitchen and my kids will think it's normal to have a markerboard--I mean, I ask you, where else do you post chore lists, make menus, work math problems, or diagram sentences for the edification of all?) and began sketching and explaining until I ran out of space, my daughter had a decent understanding of the IBLP structures we had been part of, and I had drawn something like a new constellation.

My daughter snapped a photo of my sloppy writing and disappeared to her computer to turn it into a proper diagram. I tweaked and added to it and present it here, gratefully, as her work.

As IBLP ages and Gothard's potency is diluted, I think it is important not to lose the scent of his ideas as they reach corners that would otherwise seem safe from his noxious influence. When prisoners are given "character booklets" from Strata Leadership, for example, they have no way of distinguishing which concepts were actually the grooming techniques of a sexual predator and con man.

I'm proud that Gothard's name is not familiar to my children. But I trust they'll be able to spot his poisonous manipulation and authoritarianism anywhere. 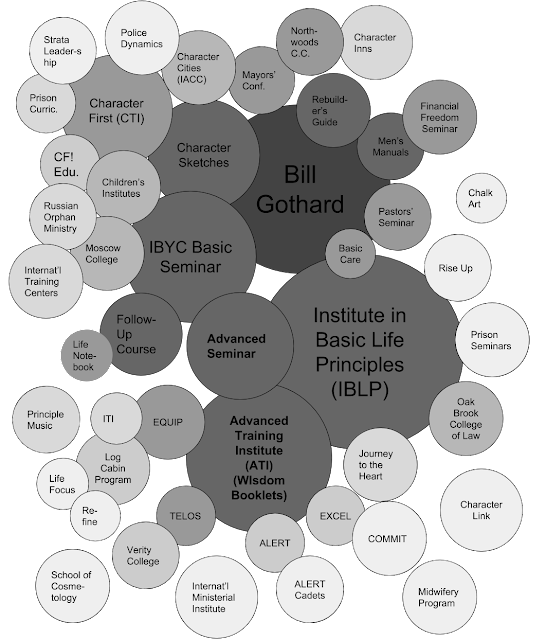