While we're at it, here is my attempt to represent the geographical spread of IBLP. At its peak, the Institute had staffed centers at these locations. Most of these were active in the early 2000's.

Blue: international centers.
Yellow: never quite got off the ground.
Green: residential campuses that Gothard staffed primarily with children and young adults from his homeschool program. (Some paid for the privilege; some worked for free; others received minimum wage.)
Gray: miscellaneous buildings. Some were used to re-program youth sent by the courts or by their parents.
Red: offices of IBLP's correspondence law school, though it was partly run from other locations.


(Clicking on the image should make it clearer.) 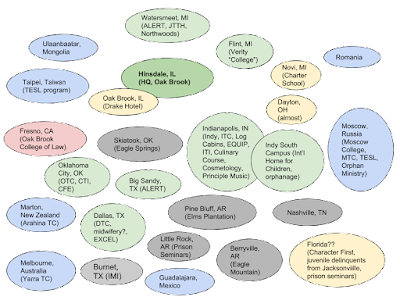