Out Loud Thoughts on Motherhood

How is motherhood "supposed" to feel? 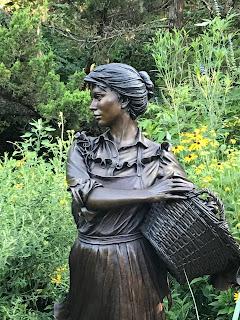 I have suspected for a long time that the sentimentality about mother-love and maternal instinct and "you know you'd just die for them" and "my heart outside my body" is either a fantasy or more bullshit propagated to make women feel guilty.

After a decade of helping raise my baby siblings, I was very curious about how motherhood would feel different from sisterhood. I cared for my siblings: I fed them, changed them, bathed them, wiped their noses, brushed their teeth, braided their hair, played with them, cleaned their scrapes, kissed their bruises. I prayed for them, sang to them, rocked them to sleep. When Mom wasn't there, I did my best to keep them safe and happy so I could present them back to her--healthy and mostly clean. As far as I could tell at the time, the only things I didn't do were grow them in my uterus and feed them from my breasts. I looked forward to having that experience because that would make me a full-fledged woman, equal in stature to my mother and her friends, not a mere surrogate but the real thing.

Having babies was expected. I didn't particularly want babies or not want them (I had an alternate life plan should we happen to be infertile), but I believed motherhood was the surest route to feeling like a true adult, and I desperately wanted that. So I was excited when I found out that everything "worked" and we had made an embryo.

When my first baby was born, I cried over her every day for weeks. She was by far the tiniest person I'd ever held, I was amazed by all I'd just experienced, and the chemicals rushing through my sore and swollen body were a combination I'd never felt before. For the next few months, my focus was sharpened to a single point: keeping her alive at all costs. By which I meant keeping myself alive, because I was her lifeline, her energy source, her matrix. I expected the same response when my son was born, but it never happened and I wondered if this meant I was a terrible and unfit mother or simply a tired and seasoned one, non-stick like a well-used cast iron skillet.

I've always felt a strong responsibility for my kids when they are in my care. But I rarely spend much time thinking about them when they are at school or under the supervision of an adult I trust. It's as if, deep down, I still believe my responsibility is to keep my kids happy and safe until their mom gets home when I will be rewarded with, "Good job; thank you." And it turned out that having my name on three birth certificates still did not make me feel like a grown-up.

Many people have heard me speculate that my maternal "instincts" were burned out on my siblings, my first batch of children, as it were. I did worry about those children for years after I left home, fretting that I couldn't give them the care and love and protection they deserved. By comparison, I felt less attached to my own children. They were always present, of course, so there was no pull to be nearer. I didn't feel the way I expected to feel as their mother. Perhaps because they developed in a healthier atmosphere, they began to differentiate from me on a much more natural schedule. And even though they came slipping out of my vagina and their multiplying cells were fueled by food I swallowed on their behalf, they could have been another series of brother and sisters, or nieces and nephews--more small humans whose DNA resembles my own. Even today, whenever I am around my family of origin, I inevitably call my kids by my siblings' names, as if they are a continuation, rather than a new generation.

Perhaps I never had "maternal instincts" at all. I've certainly never wished that babies would stay babies; I was the one counting off how many more years till they move out of the house. The smaller the child, the more energy they required, and it seemed better for everyone when they could do more things for themselves. The most fascinating thing about babies was to watch them become increasingly responsive: when my daughter's nervous system developed enough to be ticklish, when she made eye contact, when she could mimic her grandma, when my son could be saddened by words on the radio.

Watching minds grow has always brought me joy. Feeding information to children is fun, in the same way that it was fun to feed peaches to the zoo bears when I was a kid. I must have been in second or third grade when my dad came home from a business trip and handed me a paperback with a colorful cover: The Silent Storm. I had watched enough Little House on the Prairie to grasp blindness; I'd been exposed to sign language and to braille. As I read about Helen Keller and W-A-T-E-R, I could imagine being locked in black silence with peaches and cake and toys--but no alphabet. No words. No books. No songs. No Sesame Street. To my mind, it was a fate worse than death. And tragically, no amount of parental love could bring Helen to life. Their desperation, however, led them to Annie Sullivan who slipped the key of language under the door of Helen's prison. That story gave me goosebumps. I reenacted it more than once, holding one hand under a cold spigot while spelling w-a-t-e-r with the other. Annie Sullivan was my kind of superhero; her spectacles were better than any cape. I longed for a Teacher, a companion and mentor to feed me all the knowledge I could hold. I wanted to be her. I would choose Annie Sullivan over Mrs. Keller any day.

And maybe that's who I've been.

Sometime in my mid-20's, I realized I'd grown up in a linguistics laboratory. And soon it was my turn to give my own children language. And not just language, but literacy: literature, comedy, journalism, speculation, poetry, song. They have the tools with which to experience this world and to express their sensations, as well to imagine new worlds and to communicate those images. They have inner resources I didn't have, and outlets for idea exchange that I didn't have, either. I'm thankful beyond words that they have teachers and friends and support systems outside the four walls of this house.

As a new mom, I imitated my own mom. I was a confident mother because I'd done most of it before, and the rest I'd watched her do. Every good memory from my childhood I tried to recreate for my own kids. But my own childhood ended by the time I was a tween, from then on I was more of a mother's helper than a daughter. I had years of practice raising young children...but now that my kids are teenagers? I'm winging it. It's all uncharted territory now.

Their lives are so different from my own at their age that we might have grown up on different planets. When I speak in the language of my first twenty-five years, only my husband understands the words. I feel lucky to live with someone who still remembers the world we came from, while my kids stare and ask, "What did you say? What does that even mean?" Sometimes we translate it for them, sometimes we let the words evaporate in the space that will always be between our children and us.


So I don't know how motherhood is "supposed" to feel. But when I listen to my children today, I feel pride mixed with awe. I enjoy their company. It's a treat to share new experiences with them. To introduce them to people and places and activities that hold meaning for me. To watch their personalities bloom. Watching them be themselves, I continually learn new things about my self. Now I find myself imitating them. I admire their courage, their discipline, their soft hearts, their creativity, and their wisdom.

They are, unexpectedly, becoming my favorite people and my best friends.