How God Gave Us Peanut Butter. And Granola. 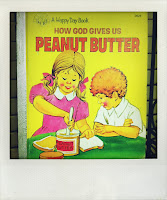 Among my favorite picture books as a child was the happy little story How God Gives Us Peanut Butter. With vivid, cheerful illustrations it followed the trail from the sun on the farmer's fields to the jars of creamy or crunchy jars on the grocery shelf. But that was only part of the story.

Our peanut butter came fresh-ground from the health food store, or in large plastic pails from Country Life, a whole foods distributor downstate. Mom studied nutrition in nursing school and took our diet quite seriously. Twice a year she placed an order for staples in bulk. A truck would show up at our door, delivering heavy sacks of rolled oats, cracked wheat, graham flour, cornmeal and brown rice. There would be packages of dried fruit, carob morsels, shredded coconut, or soy spaghetti; bottles of fragrant honey, pungent blackstrap molasses, golden safflower oil, and cloudy unfiltered apple juice; and bags of raw almonds, walnuts, cashews, and sunflower seeds.

We stored this bounty in our bulging pantry and in the deep freezer, alongside the ice cream, the homemade jam, the veggies from our garden, and the neat packages of the side of the beef we'd bought in the fall. All year long the food would nourish us, transformed into aromatic sandwich breads, hearty cakes and cookies, muffins and pancakes, warm breakfast porridge, sustaining trail mix, and granola. My brothers were especially delighted when Mom added peanut butter to the granola recipe.

Some of the Country Life food labels had Bible verses on them, but we didn't usually notice them. They simply identified the folks at Country Life as part of our tribe. We had a hand-painted "Jesus is Lord" sign hanging prominently over our garage, after all.

But the tale of how God gave us peanut butter granola is far more fascinating than that. It started when Jesus stood up his waiting bride in 1844--a cosmic miscommunication that came to be known as "The Great Disappointment"--and ended up sending us granola instead.

The Harmon family of Maine were among the disappointed. They had followed William Miller's predictions of Christ's second coming since 1840 and even been "disfellowshipped" by their Methodist church for their Adventist loyalties. Jesus' failure to materialize on October 22 was a cruel blow.

The Harmons had eight children, including twin girls, Ellen and Elizabeth. At nine years old, Ellen had been hit in the head with a rock and was out cold for three weeks. Not only did this abruptly end her education, she would suffer lifelong health problems as well. Nevertheless, Ellen made a considerable recovery and as a teen became an ardent believer and evangelist in the Adventist cause. The Disappointment hit her hard, but she refused to be discouraged.

At a prayer meeting a few months afterward, still reeling from the shock and trying to make sense of it all, 17-year-old Ellen had a "vision" involving God's plan for the now desperate Adventists. She felt surrounded by light, and had a sensation of rising higher and higher. When the vision ended, Ellen was weepy and depressed to be sitting in prayer meeting, but her religious friends embraced her account as a sign that they had not been forgotten, that their faith had not been in vain.

Ellen had another "vision" the next week. That was followed by an experience like "a ball of fire" hitting her on the chest and knocking her to the floor. One time she saw texts in golden letters and was unable to speak for hours afterward; another time she saw other planets. In 1846, Ellen married fellow Adventist James White. That same year, while visiting an Adventist who held the belief that Saturday was the "true Sabbath", Ellen had a surprising revelation:


"When the foundations of the earth were laid, then was also laid the foundation of the Sabbath. I was shown that if the true Sabbath had been kept, there would never have been an infidel or an atheist. The observance of the Sabbath would have preserved the world from idolatry."

So what about the granola? Be patient; it's coming.

Ellen and James White traveled all over New England, sharing her revelations and correcting the errors of fanatical post-Disappointment doctrines. This work took a toll on both their finances and their health, so they when followers in Battle Creek, Michigan urged them to settle there and open a publishing house, the Whites were persuaded. They spent the next several years in a flurry of business, family, and advancing the Seventh-Day Adventist movement. The pace was frantic and many zealous church leaders fell victim to physical or mental exhaustion.

Then one Sabbath morning in 1863, Ellen White envisioned a connection between health and spirituality, a picture "of the importance of following right principles in diet and in the care of the body, and of the benefits of nature's remedies--clean air, sunshine, exercise, and pure water." Health reform was the new watchword, health guidelines were distributed in pamphlet form, and in 1866 the Seventh-Day Adventists opened a health reform institute in Battle Creek. What the institute lacked, however, was credibility. Ellen White looked around the Adventist community. A teenage apprentice in the publishing house caught her eye; he was bright and disciplined, his parents pillars in the young church. Yes, John Harvey Kellogg was her man.

Realizing that credentials would boost the prestige of the Western Health Reform Institute, the Whites helped sponsor John Harvey's college education. After completing medical school, Kellogg returned to Battle Creek to take over. Under his leadership, WHRI became the Battle Creek Sanitarium, a world-class medical resort, a clinic-spa where thousands of the rich and famous flocked from the cities to be cured of dyspepsia, malaise, and more serious health problems.

Whole grains were in vogue, thanks to Sylvester Graham, Presbyterian minister turned temperance lecturer, who was convinced that sexual urges could be reduced by avoiding "flesh-meat" and other stimulating foods. Graham vilified white bread and chemical additives and advocated a diet of whole, natural plant-based foods. His recommended brown whole wheat flour was termed "Graham flour" and his name lives on in the crispy wafers we use today to support cheesecake and hold s'mores together. Ellen White was actually late to the health nut party; Oberlin College in Ohio had enforced the Graham diet on its campus during the 1830's--until students and faculty alike rebelled.

Kellogg was a Grahamite with a special fixation on colon health. He blamed masturbation on constipation, among other things, and was a proponent of circumcision (or undiluted carbolic acid applied to the clitoris) to discourage "self-abuse". An outspoken proponent of celibacy, Kellogg was proud of never consummating his marriage. Instead of sharing a room with his wife, he wrote a book about the health risks of too much sex. Instead of siring children, he adopted some of the forty-two they fostered. To ensure physical and moral health, the good doctor recommended cleansing the colon daily. His own routine included use of a super enema machine he designed himself: fifteen gallons of water in sixty seconds, followed by a yogurt flush!

With the help of his little brother Will, Kellogg developed Sanitarium menus that fit the "bland, boring, but edible" formula. Soups, salads, and legumes were fine for dinner menus, but breakfast foods were a challenge. A Dr. Caleb Jackson in New York was serving patients at his sanitarium baked nuggets made of crumbled graham biscuits--a food he called Granula. (Ellen White spent three weeks at Dr. Jackson's clinic in 1864, observing and imbibing his views on health reform.) Dr. Kellogg adapted the Granula recipe, using rolled oats instead. Following a trademark dispute with Dr. Jackson, Kellogg renamed his version Granola.

A need for nutritious meat substitutes led the Kelloggs to nut butter. Kellogg patented a process for making peanut butter around 1895. He was soon selling his product (made from steamed peanuts, not roasted) along with granola, corn flakes, and other Sanitarium specialties under his own label: the Sanitas Nut Food Company. Now former patients, even those with dentures, could conveniently continue "biologic living" from their own homes.

Dr. Kellogg eventually removed the Sanitarium from the oversight of the Seventh-Day Adventist Church and the church disfellowshipped him in 1907. His brother Will took over the cereal manufacturing business, adding public-pleasing sugar to boost sales. These changes didn't stop the Adventists from hanging onto granola, however. In Australia, the Seventh-Day Adventist Church trademarked the name "Granola" in 1921. Just last year the church's cereal manufacturing company, Sanitarium Foods, lost their legal battle to prevent Aussie restaurants and bakeries from using the term "granola".

Country Life, the co-op that delivered our peanut butter and granola ingredients, is a ministry of the Seventh-Day Adventist church, just a stone's throw from Battle Creek and the Sanitarium. The vegetarian cookbook my mom once added to her order contained lengthy quotations from Ellen White and unappealing photographs. We wondered why the editors featured such unpalatable dishes, but Dr. Kellogg would doubtless have approved.

And that, children, is how God gave us peanut butter. And granola. Which more than makes up for the Great Disappointment.
Posted by Jeri at 4:04 PM