Library Shelf: The Birth of Satan


Without Satan, why believe in God?

". . . it is hardly surprising that many monotheists have constructed the embodiment, in stories and art and imaginings, of the energy and forces in life that seem inhospitable, disorderly, fractious. This is the character we know as Satan, whose origins are the subject of this book. We cannot know, or at least we do not, whether there is a Satan beyond this Satan. But. . . [Satan] is worthy of our respectful consideration."

The Birth of Satan: Tracing the Devil's Biblical Roots, by T.J. Wray and Gregory Mobley, was earth-shattering for me. This library book kept me busy on a plane trip to Philadelphia, and I was so excited about it that I kept reading pages aloud to my sister on our drive to my uncle's Delaware beach house. 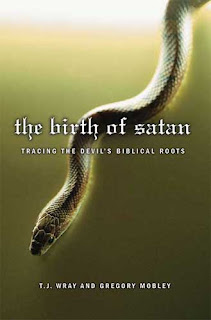 For years I had been troubled by an incident in the life of King David. Like many David stories, this one is recorded twice: once in II Samuel 24 and once in I Chronicles 21. In both versions, the king gets in big trouble with God for ordering a national census and the whole population is punished. Only in the Samuel version, God is already angry with Israel, so he purposely incites David to order the census, and then everyone gets in trouble and 70,000 people die. In the Chronicles version (the later one), Satan opposes Israel by inciting David to number the people, God gets mad, the whole nation is punished and 70,000 people die.

Now it seemed to me as a well-versed teenager that there ought to be a pretty big difference between Satan doing something, or God doing it. When I was young my parents liked to talk about putting God on the throne of my heart and not letting Satan sit there. We wanted to make God glad and that would inevitably disappoint Satan. They were polar opposites, right? Except for a strange heavenly scene in the book of Job, one wouldn't expect to find Satan and God hanging out together. So how did the Bible writers get these two characters mixed up?

A 19th-century commentary by the theologian Albert Barnes waves away the difficulty: "All temptation is permitted by God.... If Satan therefore provoked David to number the people, God allowed him. And what God allows, He may be said to do." Wow. That little sentence puts an awful lot of responsibility at God's feet. He committed the Holocaust. He burned witches in Salem and Protestants in Europe. He rapes women in Africa and altar boys in America. He infects people with AIDS, flies planes into buildings, and murders children in their schools.

As it turns out, monotheism is a very difficult balancing act. To make it work requires a devil so the one god left can be wholly good. Otherwise he's a monster, or bi-polar. The evolution of the Satan concept in Judaism pretty much blew my mind. The "satan" (common noun) shows up as a generic villain late in the history of the Old Testament, relieving Yahweh of some of the responsibility for his more "repellent" behavior. When the post-exilic Chronicles accounts were compiled, the scribes chose to make the satan responsible for tempting David.

Satan (proper noun) takes form as a character during the inter-testamental period, roughly around 200 B.C.E., and begins to be described as God's nemesis. The legend grew with interpretations of Genesis that accounted for the supernatural origin of demons. Followers of Jesus continued to develop this theme, supplying details and linking Satan to Old Testament characters and symbols that predated him as a personality. Dante and Milton added a great deal of color and shading to the picture, visualizing ever more horrific images in their descriptions of Satan and his infernal abode: Hell.

Authors Wray and Mobley outline some of their findings in this fascinating WBUR interview, but the book's bibliographic notes are much more complete.

Somehow learning that Satan was only a solution to an ancient theological puzzle was a seismic shift for me. Ultimately, my faith in God required a cosmic enemy--an evil being trying to snatch my soul and longing to drag me into hell. A loving God didn't frighten me, it was God and Satan both ganging up on me--like they did with Job--that made me doubt my strength.


"In the end, the patronizing answer--'Satan is the source of evil'--never answers the question of the origins of evil. Because if God is initially, fully, and finally God, the Alpha and the Omega, then Satan is merely the Beta and the Psi. Satan may have emerged before time, but not before God..."

If Satan wasn't even discovered/invented till the Babylonian Captivity, who was that sneaky talking snake? My teachers always referred to him as an incarnation of the devil, a rebellious angel bitter because God threw him out of heaven, but the Jewish scriptures never refer to the serpent that way. And who introduced evil into that perfect garden? If God used his will to create Eve in his image, but chastised her for using hers... and we're back to the age-old puzzle of monotheism. Who is responsible for evil, pain, and suffering? Is God culpable for what he allows? Is he a monster? Is he bi-polar?

I was surprised to find that losing Satan meant losing God, too. But it was strangely liberating to take responsibility for all my own thoughts. To realize that my choices were simply my own, not tied to the outcome of some cosmic tug-of-war. My desires are merely the state of being a conscious human, not fed to me by angelic or demonic forces. And King David? Well, an epidemic happened to follow his national census. Bad things still happen, whether you're a monotheist, a polytheist, or an atheist. I just find that I can move on more quickly these days, relieved of the pressure to make sense of it all or figure out if God, or his satan, is trying to get my attention.
Posted by Jeri at 7:34 PM